For Award-Winning International Contemporary Conceptual Artist, Christine Alfery, the well-deserved honors and awards just keep on coming! In this past week alone, two of Christine’s paintings have been accepted into National Juried Exhibitions, and one was awarded 3rd prize in an existing juried exhibition.

Don’t Fence Me In (above) was accepted in the 39th Annual National Juried Exhibition, A Sense of Place, to be held at the Gertrude Herbert Institute of Art in Augusta, Georgiafrom September 13th through October 18th 2019. The Awards Presentation and Opening Reception for this event will be held on Friday, September 13th 2019 from 6-8pm.

This is not the first award this painting has received! Following are other distinctions this piece has been awarded:

The Wisconsin Watercolor Exhibition Members will be showing their artwork at Gallery 110 in the Plymouth Art Center, Plymouth, Wisconsin. Christine will be showing Don’t Fence Me In andTree House.

As if that news isn’t exciting enough, Christine was also notified that her painting, The Song The Wind Sings was given a merit award at the Manito Art Leagues Regional Exhibition. Judge Ken Bloom, curator, artist from Duluth, Minnesota made these comments about her work: 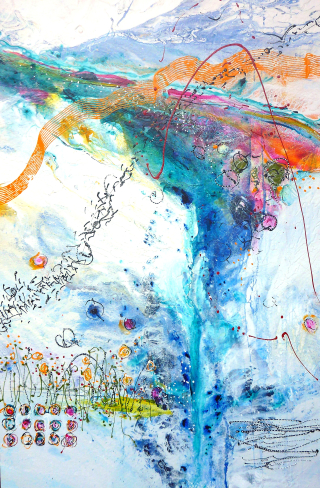 A highly abstracted and exploding composition, layered of quantitative forms superimposed upon an ambiguous landscape suggesting a tectonic cleft, as a storied map of describing evolution and transcendence.

The Song The Wind Sings

The song the wind sings
The tears the rain cried
white waves
blue against the shore
seeds sown
Footprints. And To The Moon and Back (left), received 3rd place in The Ilinois Watercolor Society’s Small Works Exhibition.

Interested in purchasing Christine’s Original Artwork or a print? Visit Christine’s website to inquire about availability and see the full range of Christine’s other work. https://christinealfery.net/ 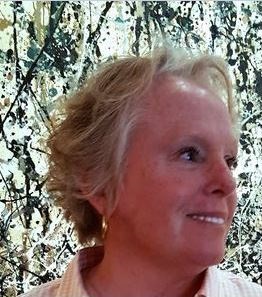 Christine Alfery has been creating and selling he